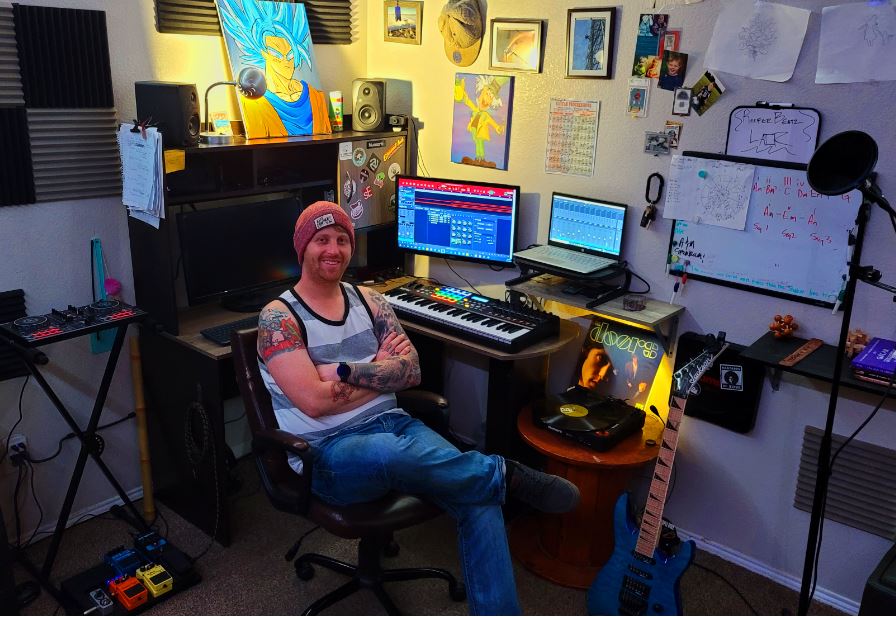 Growing up in the small town of Odessa TX, there wasn’t much to do but play football, get into trouble, or in my case…. discover music and find an escape. Music was always a big part of my life, my early influences came from many genres and artists such as Korn, Wu-Tang, Deftones, Erykah Baduh, The Roots, Jimi Hendrix, The Doors, and many others that would fill the page if I were to continue the list. Due to my love of music, I decided to join the school band as a saxophonist. I excelled very quickly and my mentors noticed I had great potential with music. I became a first and second chair All-State symphonic band saxophone player (alto and soprano) as well as a first chair jazz band saxophonist. When I discovered Jazz and the endless combinations of sounds that please the ears, along with connecting the circle of fifths and music theory I knew that one day I would love a career in music.
Well, let’s just say I fell into the wrong crowd for a while, didn’t want to be the “band nerd” anymore and stopped playing music for some time, but never stopped listening and exploring new genres. After a rough ten years traveling the country working as a communication tower construction foreman (yes, hundreds of feet in the air everyday) I landed a management job working from home. THIS is when I saw the opportunity to bring music back into my life as a producer/DJ performer. I quickly purchased some guitars, an interface, mics, pedal boards, DAWs, beat/sample pads, keyboards, and synthesizers. After about 6 months of brushing back up on my Music Theory, everything clicked back into place and it felt AMAZING! I started making track after track, unable to stop, much like an addiction. The experience gained from creating multiple tracks a day and working with different software pushed my experience and music career to the next level! Soon I was making professional sounding tracks and my friends were catching on as well! I picked up a cheap DJ controller, put a few sets together, and the performances were amazing and so much fun! My Soundcloud followers have almost hit 1k at this point and I never thought I would get this far. I thank everyone who has supported me on the way and look forward to making the world dance and groove!

What Musical Genre Do You Feel Best Describes Your Music And How Would You Describe Your Sound?
HAHA, I am pretty eclectic when it comes to my genre. But I love producing all sorts of EDM music. I love me some house music(all sub genres) and I’m totally feeling the new Riddim sub genre coming out of the Dubstep scene. I try to take the atmosphere of these genres and generate melodies i feel would make the tracks both heavy and interesting. I like my tracks to tell a story to say the least…

How Did You Get Your Name? Is There A Story?
Well… my last name is Reefschneider. So throughout my life my nickname has been Reefer! “no pun intended?”

What Are or Have Been Your Musical Influences?
My musical influences originally cam from my grandmother who recently passed from cancer. She was a total flower child in the 60’s and 70’s and every morning we would listen to music from that era on the way to school… this is where it all began. I started discovering Jimi Hendrix, Janis Joplin, Led Zeppelin, The Doors, and so many more amazing artists from that era! I took this love for music and joined the Junior High band as a saxophonist, I hit All-State level in both symphonic and Jazz band as a sax player. As a result of this I began to listen to classical symphonies and concertos, as well as original Jazz tracks, music theory had become a passion of mine. At that age, besides the classical and Jazz stuff I was into a lot of different groovy music… Korn, Deftones, The Roots, Wu-Tang, Suicide Silence, Bob Marley, People Under the Stairs, and many many others. And I can say 100% that Deftones is my all-time favorite band, I was a kid raised in the late 90’s early 00’s…. total nu-metal head!

1 is a hip hop side project producing tracks with various lyricists.

2House music production and live sets. I am making about one house track a week and always changing up my live sets!

3 RIDDIM!! I love this genre as it makes me feel like the old days of nu-metal bouncing. This is an on-going project for me and you should expect to see multiple releases in the following months.

What Is Your Ultimate Goal In The Music Industry? What Is Your Plan Of Action?
My ultimate goal is to play my music on stage… whether its at a rave venue, night club, or festival. My passion comes from the crowd reaction and the amazing vibes at live shows!

M plan of action for now is to continue to perform virtual DJ sets showcasing my music on Twitch, FB Live, and YouTube. If anyone wants to join them for a show just let me know! I’m ready and hungry.

What Is Your Favorite Track To Perform Live and Why?
My favorite track to perform is “Be Careful What You Wish For”. Serj Tankian released an awesome sample pack with some of his epic vocals on it. I took the vocals and came up with a melodic Riddim/heavy metal mashup that just gets me going. The lyrics are very powerful as well.

What Has Been The Biggest Challenge In Your Career Thus Far?
The biggest challenge so far has been promotion of course. With so many talented musicians out there and most of the venues being shut down, its tough competition out there.

What’s Your Typical Songwriting Process?
Typically I will start with a bass line or a melody on my MIDI keyboard. Then I will just stat building loops and effects utilizing MPC beats. I then transfer to Pro Tools for final edit/master.

How Has Social Media Influenced Your Career As An Artist?
I feel like social media is a great way for underground artists to get their music heard. Once I noticed how much traction social media was getting, the light bulb clicked in my head stating “this is my way in”

What Did You Do Before You Started Making Music?
Before producing music I worked as a tower climber for a little over a decade. We were the guys who built the tall communication towers you might notice among your local skyline. Working hundreds of feet in the air everyday was a rush and I loved it! I eventually worked my way up from greenie, to Site Foreman, to Manager. With my manager role I am able to work from home more often which gives me time to work on music during lunch and immediately after work since I am already on my computer. LOL.

Any Advice For Young People (Men or Women) That Want To Succeed In The Music World?
Never stop chasing your goals and don’t let anyone tell you that school Band, Orchestra, or Choir isn’t cool. Because obviously it is.

What Would You Change In The Music Industry If You Were A Top Music Executive?
I feel there needs to be more festivals open with cheaper pricing… spread the wealth ya know!

How Do You Feel About Originality?
Originality is a very important factor when producing music. While we all have our influences, these merely play a factor in how we create our own sound.

Is There Anything Else We Should Know About You Or That You Would Like to Add?
I’m open for communications with music labels, traveling DJ groups, and festivals/Rave promoters. Give me a shout!