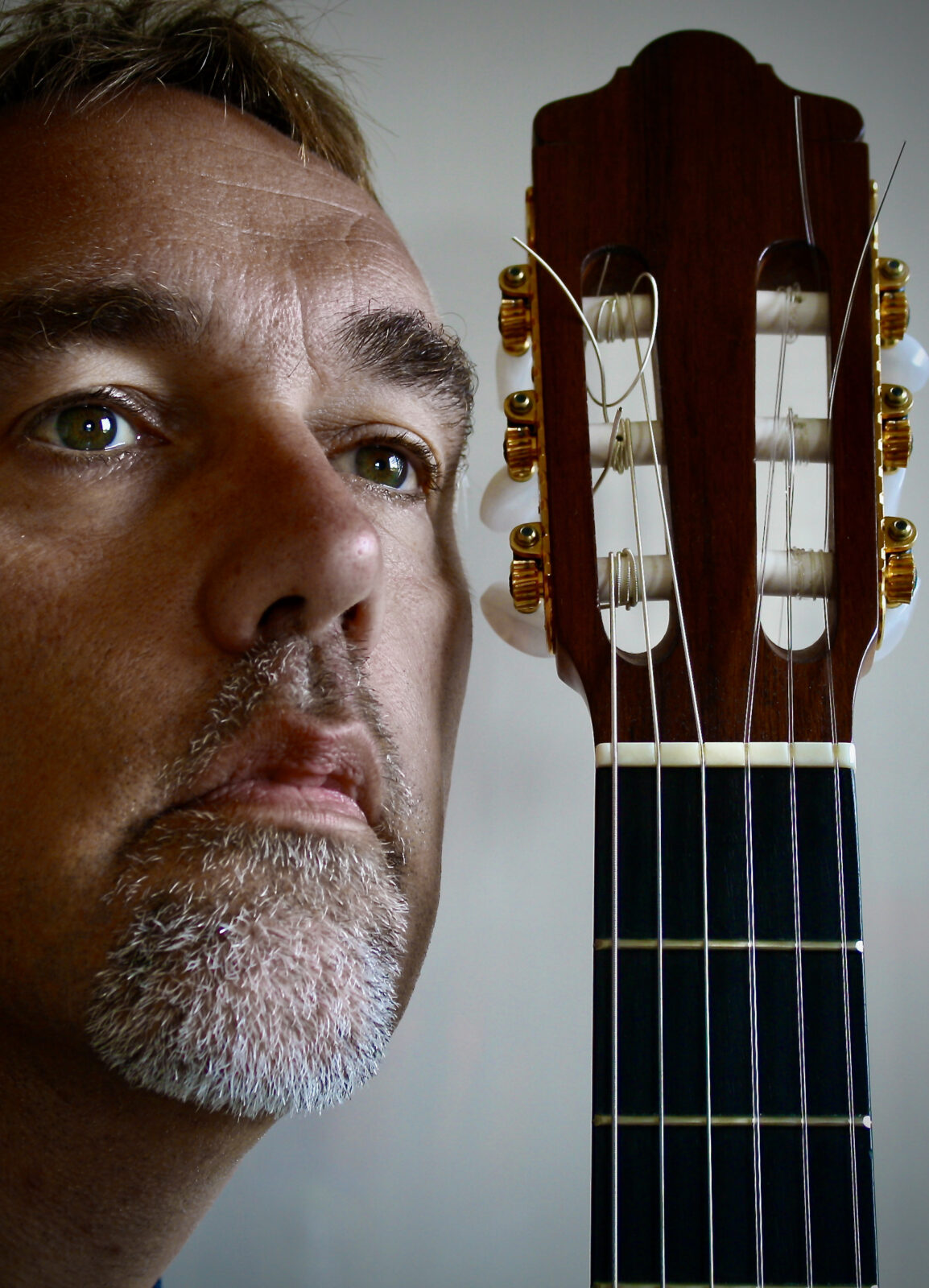 Music in itself is powerful, it can take you to another level.
Netherlands based Luck Surus tries to use that power, by melodies that come from the heart.
Ever since he started playing the guitar and noticed that people liked what he did, he finds pleasure in having people listen.
Even though his musical education (Conservatory with guitar as main instrument) was mostly classical, he never lost sight of other genres, like sympho (prog), jazz, blues, rock, world music, and the music of the hit lists that played on radio and television.
As the youngest of five, each of them with a distinctive musical taste, he came in contact with a wide variety of sounds, ranging from mainstream pop to the deepest underground of the sixties and seventies. You might hear some of these styles in the music on this website.
Luck Surus played in classical ensembles, in a folkrock band (Tate Younger), in a James Taylor Tribute band, in different cover bands, in a band that accompanies a Seamans Choir (Shanties) and has performed as a solo guitarist with classical music.
Some of his songs were part of the repertoire of these groups.
Lately he is usually working as guitar teacher and as studio recording artist. Also his skills can be found through the compositions for (classical) guitar and different other ensembles he has written.

What Musical Genre Do You Feel Best Describes Your Music And How Would You Describe Your Sound?
Alternative.
My sound has been influenced by a lot of different kinds of music. Most important artist for me I will mention later on.
You may find prog, singer/songwriter, rock, pop, some jazz and world and even classical influences.

How Did You Get Your Name? Is There A Story?
Surus was the last remaining elephant to cross over the Alps with Hannibal. As I was the last member of a musical project that suited me well. As the name was already taken I added the Luck, so now it sounded a bit like luxurious, which I think is somewhat like what I am busy with: ‘a luxurious hobby’.

What Are or Have Been Your Musical Influences?
See above. Artists like David Sylvian (Japan), Peter Hammill (VanderGraaf Generator), David Crosby, Kate Bush, Steely Dan,
The Cure, Spock’s Beard, Genesis, Supertramp, Pink Floyd and many more have been of some influence to me. Classical composers like Stravinsky, Brahms and Bach as well.

What Are You Working On Now? Any Future Collaborations We Can Look Forward To?
At the moment I am working on a project based on poems by Ireland based artist Corina Duyn (check out her website). She is a long time friend and suffers from M.E., a disease that affects your whole system. She has written some beautiful short poems about her life and illness and agreed that I would use some of them to put on music.

What Is Your Ultimate Goal In The Music Industry? What Is Your Plan Of Action?
For people to hear and appreciate my music. No more and no less.

What Is Your Favorite Track To Perform Live and Why?
I don’t perform live with my own music at the moment, that is some years ago. One of my favorite tracks is Bike, which can be found on my Youtube channel, and that track finds me riding my bike as I love doing.

What Has Been The Biggest Challenge In Your Career Thus Far?
To get my music listened to by a lot of people.

What’s Your Typical Songwriting Process?
That differs. Sometimes I have a melody in my head, sometimes the lyrics come first, sometimes I just start to play the guitar or the keyboard to find a new tune.

How Has Social Media Influenced Your Career As An Artist?
Not much yet. As I began social media was not there. The latest years I have been using it mainly to get pupils for my guitar school and now I am busy working on my Youtube channel too. On that channel you can find quite a few songs by now. My website is only on air since a month or so, hopefully that will attract some attention.

What Are Some Tracks and Artists Currently On Your Playlist?
Mainly artist like the ones mentioned before and also music by Big Big Train, Coldplay, Ed Sheeran, Transatlantic. And as I am a composer too music by myself, like some string quartets I have composed lately.

What Did You Do Before You Started Making Music?
I have been making music since I was eleven years of age, so what I did before that I don’t recall very clearly.

Any Advice For Young People (Men or Women) That Want To Succeed In The Music World?
Be and stay yourself. Don’t let the hectic of the music industry get to you.

What Would You Change In The Music Industry If You Were A Top Music Executive?
The influence of some producers. When you compare some demo’s with what the producer has made of it, you can hear the artist has lost his uniqueness.

How Do You Feel About Originality?
The most important thing there is for an artist.

Is There Anything Else We Should Know About You Or That You Would Like to Add?
Most of the tracks I have made have been written, recorded and produced in my room. Even some videos have been made there. This is the best place for me to focus on what I am doing.
After having worked for a number of years in the CD industry (the company I worked for went bankrupt as the CD sales dropped), I have set up my own guitar school which is a huge success. I love teaching people how to play the guitar and how to develop their own unique artistry.