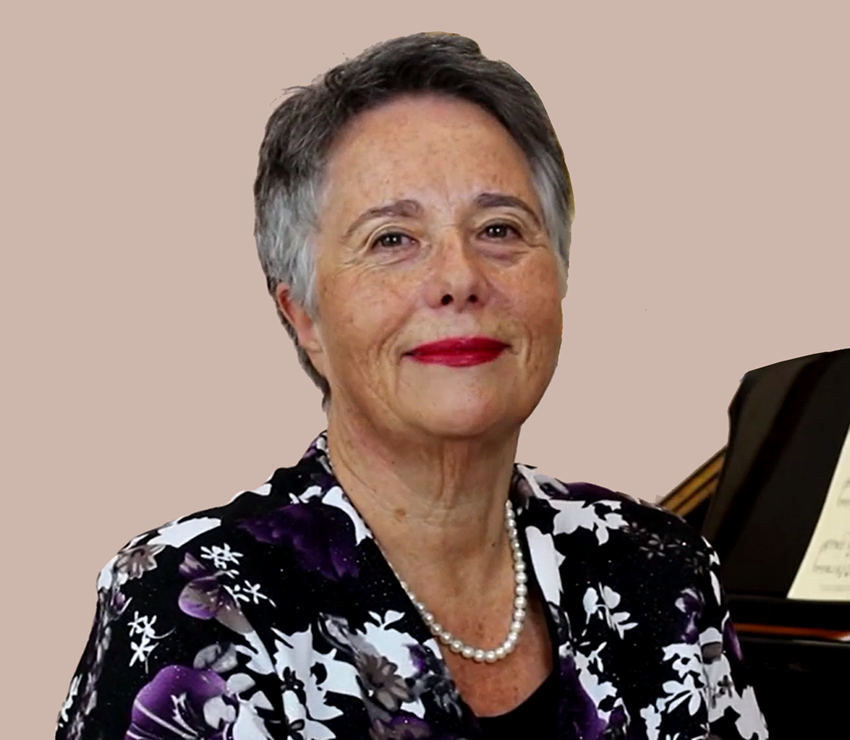 Bio
Award-winning Composer Margaret Brandman has received wide acclaim for her powerful compositions, characterized by an original tonality, melodic richness and engaging expression. Her catalogue of works includes solo instrumental pieces, chamber works, orchestral works as well as vocal and choral works, composed across a wide range of genres from contemporary classical through to Jazz and Latin-American. Her music is performed regularly in concert and receives world-wide and international airplay.
Margaret Brandman began her musical studies at age four, studying accordion and piano, taking up both guitar and clarinet in her teens. Her education, supported by formal studies in piano, clarinet, harmony and composition at the Sydney Conservatorium of Music, covered many styles of music.
Ms. Brandman was awarded a scholarship to the University of Sydney, where she studied composition with Australian contemporary classical composer Peter Sculthorpe. In 1975 she was awarded the B. Mus (Composition), having already acquired her A. Mus A. (piano) and Teacher of Pianoforte diploma. She has since also been awarded the F. Comp. ASMC, F. Mus. Ed. ASMC and L. Perf. ASMC degrees by the Australian Society for Musicology and Composition, Hon. FNMSM (UK), the Dip. E in Piano Pedagogy of the World Piano Teacher’s Association (Serbia) and the Hon. D.L from the IBC. She has also received the World Forum’s Distinguished Intellectual Contribution Award (2012) for the continent of Australia for her performances and lectures in the UK. She has twice taken out the BEST FOREIGN COMPOSER award from the Artemis Film Festival in Los Angeles. In 2021 she won the award for SPIRT VISIONS Symphonic Tone Poem which appears on Polarities 2 (nv 6353) and in 2019 she won the award for Firestorm Symphony (III) which appears on her SENSATIONS CD (nv6041)

Margaret Brandman has been performing and recording in Australia and internationally for many years. Highlights include her Rhapsodies to Rhumbas concerts (2013 & 2015) and the 2016 concert in Sydney with Baritone Martin Cooke of the Bavarian State Opera Company. Her early albums include Sonorities and Images and Songs of Love and Desire, a song cycle of six songs. Parma Recordings (USA) has also produced three albums of her music to date – Sensations – Wind, Waves, Birds and Fire (NV6041) featuring orchestral and chamber works, Abrazo (AR0001), recorded in Cuba and including the suite Warm Winds in Havana for saxophone quartet and percussion, and Cosmic Wheel of the Zodiac – a song cycle for the 12 signs of the Zodiac (NV 6160). In September 2017 the Prague Mixed Chamber Choir, under the direction of Jiří Petrdlík, performed and recorded both solo and duet versions of the songs and Margaret’s own choral arrangements of the song cycle, composed to the lyrics of astropoet Benita Rainer. Featured vocal soloists on the album include Barbora Polâšková and Matěj Chadima with Petr Ožana as piano associate. The work was performed in the concert hall at the Czech Museum of Music in September 2017. Margaret supervised the recording in the studio, and was guest of honour at the concert. Her latest orchestral tone-poem Spirit Visions was recorded by the Moravian Philharmonic Orchestra in September 2020.

Margaret Brandman,
What Musical Genre Do You Feel Best Describes Your Music And How Would You Describe Your Sound?
Modern Classical with Jazz and Latin-American influences. Music ranging from calming meditative works, to lively rhythmic music all with sophisticated harmonies.
How Did You Get Your Name? Is There A Story?
I have made a name in the music industry through working for over 50 years as a composer, arranger, recording artist, music educator, author and publisher. I have music published in Germany by Furore Music as well as internationally published works.
What Are or Have Been Your Musical Influences?
Classical composers from medieval times through to the present, especially Bach, Debussy, Ravel and Gershwin, plus Jazz musicians/composers, in particular pianists Bill Evans, Chick Corea, Dave Brubeck, Kirk Lightsey and Latin American composers namely Antonio Carlos Jobim and the Sergio Mendes group.
What Are You Working On Now? Any Future Collaborations We Can Look Forward To?
A Latin American suite of seven pieces for the Vov Dylan Palace Orchestra, and more works for Cello and Piano in my Cello Sensations series which I have been recording with cellist Ariel Volovelsky.
What Is Your Ultimate Goal In The Music Industry? What Is Your Plan Of Action?
To bring joy to the world with my music.
What Is Your Favorite Track To Perform Live and Why?
‘When Spirits Soar’ for Alto Sax and Piano. I enjoy working with other musicians and this is one of my works that brings exhilaration to myself, the co-performer and the audience.
What’s Your Typical Songwriting Process?
As I compose for large ensembles – orchestras, string ensembles, woodwind ensembles as well as songs, instrumental solos, solo songs and choirs, there is no typical process, but each composition needs to begin with an inspired theme, which can then be further developed and arranged. The themes come to me when walking or just improvising at the piano.
What Are Some Tracks and Artists Currently On Your Playlist?
Chris Botti, Paul Simon, Jacob Collier, Bill Evans, Chick Corea, Judy Collins, Ravel, Faure, Bach, John Williams, Michel Colombier, Joaquin Rodrigo, Desiree Regina, Barbora Polaskova, Moravian Philharmonic Orchestra. Diana Krall,
What Did You Do Before You Started Making Music?
I started making music at the age of four – so probably learnt to read, write and add up before making music!.
What Would You Change In The Music Industry If You Were A Top Music Executive?
Priorities music by women.
How Do You Feel About Originality?
Originality is important, but having skills in composition and the arrangement of music is just as relevant.
Is There Anything Else We Should Know About You Or That You Would Like to Add?
I’m very pleased to have won the BEST FOREIGN COMPOSITION award from the ARTEMIS FILM FESTIVAL in Los Angeles, two years in a row for my orchestral works FIRESTORM SYMPHONY (2019) and SPIRIT VISIONS (2021) (They didn’t run the festival due to covid in 2020).