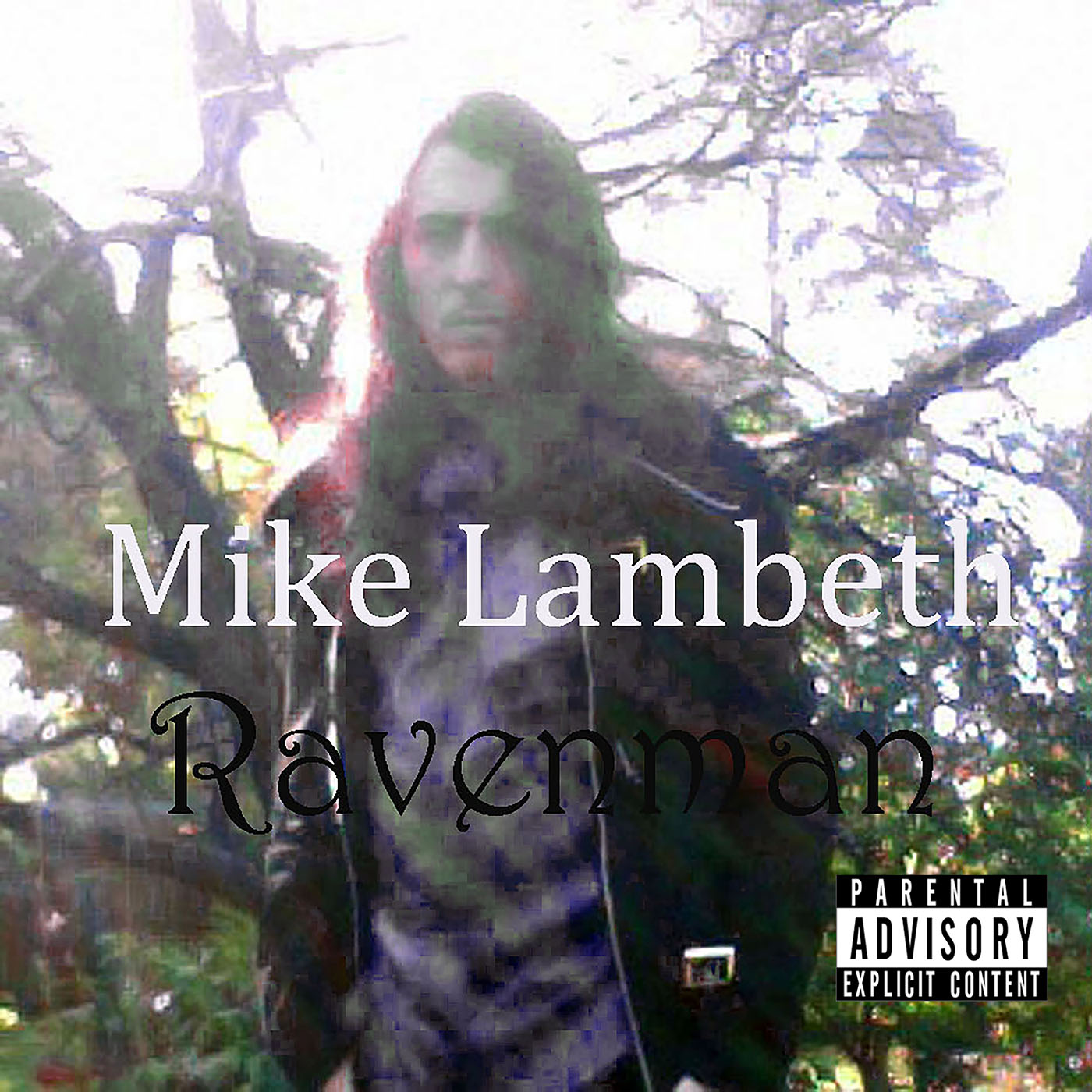 Mike Lambeth,
What Musical Genre Do You Feel Best Describes Your Music And How Would You Describe Your Sound?
Gothic Rock/ Metal. Gothic because of the nature of the Lyrical Content and Vocals and Rock / Metal because of the sound and riffs.
How Did You Get Your Name? Is There A Story?
Well, I already have a Band that I play Bass and write for called Solace in Exile, so since I was making an Album and Singing on it – it made sense to use my own name.
The Mike Lambeth Project seemed a little too much.

Getting the name for my album? Well, that’s another story.

My Birth Mother is a Psychic and introduced me to Shamanism.
The Raven is quite a prominent lyrical theme through-out the album.
What Are or Have Been Your Musical Influences?
Well, to be honest I didn’t actually know I was making a solo album in the beginning.
I thought I was going to write a song to make a video clip, inspired by Marilyn Manson.

I was in between gigs with my Band Solace in Exile and I was hanging out with my music producer and we were watching video clips on youtube, when I saw the clip ‘The Long Road outta Hell’.

I said to Rich,
“Wish we would make a clip like that!”.
Rich asked if I had any songs that didn’t belong to Solace in Exile?
That was how and why we recorded ‘Stigmata’.

The 2nd song we recorded for a friend’s short film.

The Director called me up, as he was a bit of a fan of Solace in Exile and he needed a song for the end credits.
It was kind of a Horror movie – so it required something dark.
So that was the idea behind the song ‘Forest Styx’.

The producer for the short film I was involved in was making a web series and asked me if I wanted to be an extra in one of the scenes.
They were also a bit of a fan of my music and later asked if I was interested in having one of my songs for the sound track.
The scene he had in mind was a night club scene – so I pictured something in the way of Rammstein and Nine Inch Nails – so I wrote ‘The Brainwashed Elite’.

So, there are the bands that had an influence on me such as: Black Sabbath, David Bowie, Marilyn Manson, Rammstein, Nine Inch Nails, Theatre of Tragedy, Therion and Warrell Dane.

Although, having friends that are aspiring film makers, had a bit of inspiration as well.

Also, music producers who see potential in their artists that they themselves had not considered yet.
What Are You Working On Now? Any Future Collaborations We Can Look Forward To?
I am actually in the middle of trying to finish the next album with my earlier band Solace in Exile.

The Drums, Bass, guide guitars and actual vocals are more or less recorded.
We just really need to finish laying down all the lead guitars and then on to mixing the songs.

I can’t give away too much about the album, but I will say the songs are a lot heavier and faster than the previous album.
What Is Your Ultimate Goal In The Music Industry? What Is Your Plan Of Action?
My Ultimate goal is to get some recognition for my music works, both with my own solo album ‘Ravenman’ and my progressive Metal Band ‘Solace In Exile’.
Perhaps play along-side some of international band I admire.

Well, it was my intention to finish the solo album and do an album launch and some more shows, but the whole Covid 19 thing has delayed that idea a little.

I have since finished the album and Remastered it. Releasing the album as a download on iTunes and Bandcamp, but I have every intention of releasing it on CD format.

I will be also looking at doing some more video clips to release my music, while waiting for the live music scene to return.
What Is Your Favorite Track To Perform Live and Why?
I haven’t played live with my solo project yet, I am in the process of getting some musicians together, but the covid thing is in the way of any immediate progress.

The two songs I am very much looking forward to playing live with a band are: ‘Shaman’ and ‘My Tempest’ because they are the most up-tempo and exciting.

Actually, ‘Death, Magic and Rebirth’ is another up-tempo epic and ‘The Devil in the 3rd eye’.
What Has Been The Biggest Challenge In Your Career Thus Far?
Trying to get my music played locally. It’s not pop music and the popular radio stations don’t play as much local content as we would like.
Also, as I am the only one financing my career, it can be a slow process.
What’s Your Typical Songwriting Process?
I usually write the music first and then write the lyrics around a fairly thought-out structure. It gives you the confines in which to write around.

However, most of the songs on the Ravenman album almost felt like they wrote themselves.
I had a rough idea what topic I might write lyrically about, while still composing the music.

They called to me while I was awake and asleep … and even in meditation.
How Has Social Media Influenced Your Career As An Artist?
Facebook and youtube are great for advertising and promoting your music visually and it is a good way to network with people who like a similar sort of music.

In fact, people who may not normally listen to your type of music, might take an interest in you, by simply being on some of the same music platforms that are around at the moment online.

Also, internet radio and getting on some cool playlists with similar artists.
What Are Some Tracks and Artists Currently On Your Playlist?
Well, I am currently listening to Ghost, Dimmu Borgir, Shihad, Nine Inch Nails, Demons and Wizards and Powerwolf
What Did You Do Before You Started Making Music?
I was playing Bass in bands since high school.
I sang in the school quire, with the intension of being the next Bruce Dickenson – until I realised that I was never going to be a Tenor.

After I left school, I used to play Bass Guitar in the bands and orchestras in the local musicals and played in some Jazz bands, before I left New Zealand to further my career as a musician in Sydney Australia.

I used to play predominantly in cover bands in New Zealand, but as I started playing in original bands in Australia, I began to focus more on writing my own songs.

Obviously, I wasn’t making money as a musician playing originals, so I worked in retail and did some Bar Tending, before I got into Office Work.

While I was still working in retail, I started doing some acting work as an extra, thinking it might help me network some sound track composing, however I discovered I was quite partial to acting as well.

I still do some acting when-ever I get the opportunity, but it really did help for making and producing my own music videos.
Any Advice For Young People (Men or Women) That Want To Succeed In The Music World?
Love your fans.

Three words the producer of ‘New Acquaintances and absent friends’ album taught me (Solace In exile). Love your fans.

Whatever you release, make sure it sounds great!
Try not to cut corners, spend time developing your songs before you get into the studio.

Get it right the first time, otherwise you will forever be reflecting on any mistakes every time you listen to any of your earlier recordings.

Make the album/ song you want to make and try not to lose sight of the vision that brought you to wanting to make music in the first place.

Dream big, even if it might be difficult to match your live set with the recording.
Just keep doing it, learn by experience.

Even if you try and feel fail – try again.
Keep making music and learn from your experiences. They will help you with your next project.

I’ve played in various bands and projects, they while may not all have had the success they deserve –I’m still proud of the work done.

Just remember you only need success with one act.
The chances are high that with the success of something it can mean exposure to your previous work. Love your fans.
What Would You Change In The Music Industry If You Were A Top Music Executive?
Going by what is currently popular, I would look for more original music/ bands that don’t all sound like all the already successful acts.

If you’re good you’re good, I’m not a fan of crap music just because it got so many hits on Youtube and Facebook.

Successful and popular doesn’t always equal credible – but that’s just my personal taste and opinion.
How Do You Feel About Originality?
I wish that there was more of it around. I must admit I get a bit bit annoyed when bands or musicians rip of popular bands. I mean I have an obvious Black Sabbath influence – but nothing on my album suggests that any of my songs sound like any of their songs, if you know what I mean? It okay to be inspired by an artist, but you have to put your own twist on it, or you might as well be another tribute band & play covers.
Is There Anything Else We Should Know About You Or That You Would Like to Add?
Well, just keep a eye and an ear out. Hopefully if I don’t release anything else new under my solo project there will be some some more video clips for sure – but the new Solace in Exile album is in the pipeline, were still in the process of recording guitar tracks, but songs are there – they just need to be finished and mixed.