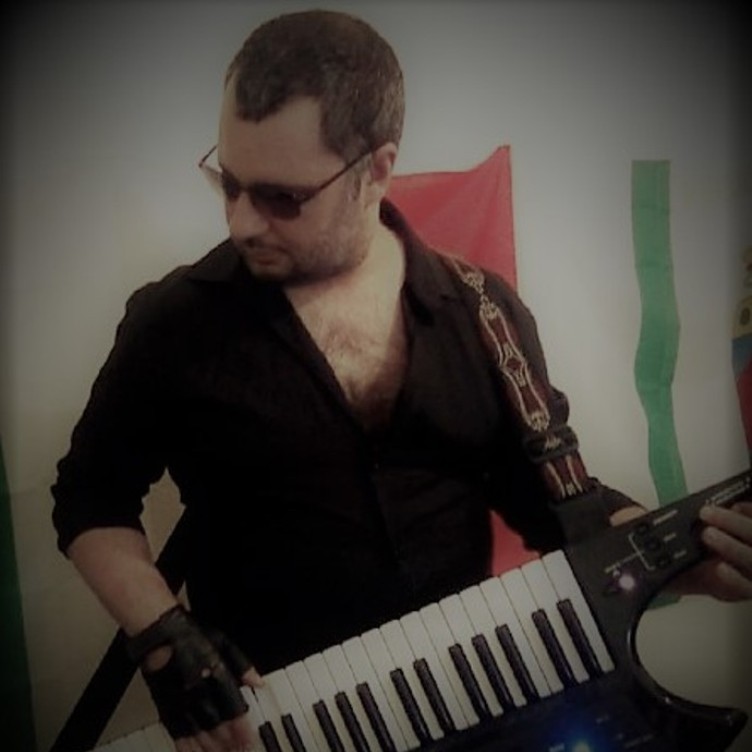 Bio
Fabio Santangelo is a keyboardist, Christian singer-songwriter and composer of soundtracks and instrumental electronic music.
Born in Foggia in 1979, Fabio grew up listening to the Word of the Lord from an early age in the Evangelical Church of the Brothers of Foggia.
At the age of 14, Fabio began studying piano which he abandoned after three years to devote himself completely to synthesizers. After years of practice, Fabio has developed his own keyboard technique which allows him to play a wide range of musical genres.
Over the years Fabio has been serving with his music in the places where he moved, after starting as a keyboard player for the Adolescent Group of the Evangelical Church of Foggia (Via Taranto) and moving to the Youth Group of the same, Fabio has made up himself also in the Choir and as a musician during Sunday and midweek services. Having also become a permanent presence as a keyboard player at the biblical camps of the Bethel Center in Castelnuovo della Daunia (FG), Fabio then moved to Bari, Frosinone, Palermo and finally to Vigevano (PV) where he still resides, coming into contact with many musicians and singers from the Italian Evangelical scene including the Christian singer-songwriter Antonio Santoro.
With Santoro he founded in 2006 the Choral of the Church of Vigevano and later in 2011, the group “Dual Sound”, still working, and with two albums in their discography.
In 2016 Fabio composed, for the theater, the soundtrack of “Via Di Fuga” (Escaple Lane) by the Director Giuseppe Cristofani, recently deceased and, in 2019 he composed the soundtracks for “Nemesis” for the American voiceover poet Keefier Unzipped. Both works merged into the instrumental album “Nemesis & Via Di Fuga” of 2020. The album also contains the “Requiem” version of Via Di Fuga, written for the death of Maestro Cristofani.
In the first months of 2021 “La Casa Di Vetro” is released, the first solo singing project that contains nine Christian songs plus one instrumental.
Always in 2021 Fabio released a new instrumental project, dedicated to the beauties of the outer space and entitled “Cosmo”. The album contains ten electronic and sci-fi instrumental tracks.
During the more than 25 years of musical life Fabio has composed a large number of melodies and instrumentals, which will soon converge in his solo and collaborative projects.

Fabio Santangelo,
What Musical Genre Do You Feel Best Describes Your Music And How Would You Describe Your Sound?
I am a Composer of Electronic Instrumentals, I also have tried to sing in one album but it’s not really my job. My sound can be described as a mixture of electronic sounds and orchestral ones, but I have some blues and jazz projects in my mind as well. What I feel like doing, I try to do it, using just my synthesizers.
How Did You Get Your Name? Is There A Story?
Oh well, my mother gave me the name and my father the surname!
What Are or Have Been Your Musical Influences?
This is an interesting question. Well let’s say that I have a dual musical “soul”. I have always been attracted by synthesizers and my main influences are Vangelis and Mike Oldfield. But when I was studying piano, my Maestro introduced me to the Blues. One day he gave me as “homework” to jam along “Nobody Knows You When You’re Down & Out” by Eric Clapton. Since then Clapton has been my main influence in Blues. As I said, a dual soul!
What Are You Working On Now? Any Future Collaborations We Can Look Forward To?
At the moment I am working on two projects. My solo project is called “Atmosfere” (Atmospheres) and it’s going to be an instrumental album containing tracks from various music cultures, even something from the past. The album should be released in September 2021. The other project is a Christian Pop album with the “Dual Sound”, a musical duo in which I am the “one man band” and my fellow Antonio Santoro is the singer. We still don’t have a date for our next album but we already have some finished some songs.
What Is Your Ultimate Goal In The Music Industry? What Is Your Plan Of Action?
I divided my life in two parts. The first until my age of 40, and the second after it. This is why since I was a boy I always thought of that age as the moment to take the stock of situation. Until my 40s my goal was to have a professional career in music, now it is just to enjoy what I achieved so far, and it’s not few. So my plan of action changed drastically. Now I take things as they came, and enjoy them.
What Is Your Favorite Track To Perform Live and Why?
I noticed that performing my “Magnetosfera” from my latest album “Cosmo” puts a smile on my face when I play live. I love all my tracks, they are like sons to me, but this one makes me particularly happy.
What Has Been The Biggest Challenge In Your Career Thus Far?
The soundtracks for Via Di Fuga. It’s been a great challenge and an important moment in my music. Until 2015 I never worked for Theatre and such. In the past it happened that someone bought my instrumentals for their project, but in 2015 Giuseppe Cristofani, an Italian Theatrical Director, called me for the soundtracks of his piece. It was something totally new and I spent weeks listening to cinematic soundtracks to learn something. The result was appreciated and it can be heard in my album “Nemesis & Via Di Fuga”.
What’s Your Typical Songwriting Process?
I don’t have a typical process. Sometimes I start from a melody going through my head, sometimes from a sequence of chords, sometimes I just love a sound and I build things around it. It’s very various.
How Has Social Media Influenced Your Career As An Artist?
I started using the internet for music back in the ’90s, and I started playing in 1993. Internet and social media are the tracks my music career travels on since the very beginning. Especially live streaming socials gave me the opportunity to perform in front of a worldwide audience.
What Are Some Tracks and Artists Currently On Your Playlist?
I listen to musicians especially. Lately I am in love with 2Cellos and Lindsey Stirling, besides of course the ones who influenced my music.
What Did You Do Before You Started Making Music?
I started at age of 14, so before making music I used to go to school!
Any Advice For Young People (Men or Women) That Want To Succeed In The Music World?
Don’t aim for success, don’t aim for money. Aim for music. Success will come eventually, money too. Or maybe not. If you make music to be rich you’re not making music, you’re doing business. Art is another thing.
What Would You Change In The Music Industry If You Were A Top Music Executive?
It’s hard to tell, things work the way they do and it’s hard to imagine them to work differently. Maybe some false promises.
How Do You Feel About Originality?
Originality is the key.
Is There Anything Else We Should Know About You Or That You Would Like to Add?
Well there is a weird thing about me. I don’t love money. No kidding. I need them for living, as everyone else, but money are not my goal, they’re just a mean to me. This view influences my way of making music of course. Thanks to God, besides music, I have a work that allows me to live and gives me time for music. So when it comes to music I just love to share it. Even for free, why not? Of course donations, tips and such are welcome but never required. I just love to think somebody somewhere had a better day because of one of my tunes. And when somebody tells me so, they make my day.