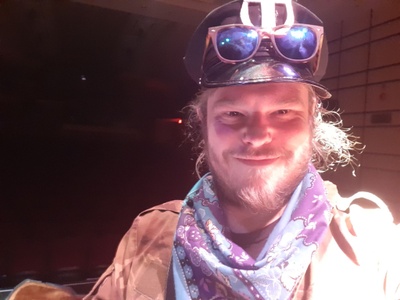 Bio
Marionnette Pointue is a musician, composer and singer from North Western Quebec, Canada. He is currently active in several musical projects including the groups PLoZ (PLoZ.bandcamp.com), Chaton Suicide (Chatonsuicide.com) and L’Orchestre Pointue, a rock band currently in composition.
He continues to actively pursue his solo career with several releases in 2020 including his 5th and 6th albums Anthropomorphic and Mystik Machines, the singles Pop Séquel 3 Couleurs and UNITED.

The name Marionnette Pointue was born in 2001 as a character in the future experimental progressive rock group PLoZ. In 2005, Dominic Bérubé AKA Marionnette Pointue, specializes in electronic and ambient music but has always been immersed in hard rock, progressive rock and blues accumulating collaborations on the albums of several groups between 2001 and 2021.
Unreal timbres, cinematic atmospheres, painting to music, surprising and disturbing textures will certainly transport you far from the monotony of pop.

Dominic Bérubé,
What Musical Genre Do You Feel Best Describes Your Music And How Would You Describe Your Sound?
I play each and every genre I feel like composing. I have mostly a rock background, having played in many rock bands in the past, still I also create ambient music, electronic music, always with a unique experimental touch. There is also some Blues to my sound, espescially when I perform on guitar.
How Did You Get Your Name? Is There A Story?
The name Marionnette Pointue, which means Picky or Pointy or Sharp Puppet (in French) is out there since 2001. Imagine the marionnette with the scisors in its hands, ready to cut the strings and free itself from the puppet master.
What Are or Have Been Your Musical Influences?
Jimi Hendrix, Frank Zappa, Black Sabbath, The Residents, Captain Beefheart, Krafwerk, King Crimson, Gentle Giant, Brian Eno, Primus, Screamin’ Jay Hawkins, Tom Waits, Howling Wolf, and many many more
What Are You Working On Now? Any Future Collaborations We Can Look Forward To?
I have a couple collabs at the embryo state. I’ve been approached by musicians from all around the world for collaborations (France, Texas, California, France, Canada, Montreal …). I won’t give names now but my plan is to release a collab album from working with these musicians.
What Is Your Ultimate Goal In The Music Industry? What Is Your Plan Of Action?
My goal is simply to make enough with my music to pay the rent and feed my 4 wonderful children. I work really hard on pushing my music on an international scale. I have a japanese Web page, I pay for promotion services in the US and I work a lot on social medias and plateforms such as Reverbnation.
What Is Your Favorite Track To Perform Live and Why?
I love to rock all songs from my new band l’Orchestre Pointue. From my solo word I would say UNITED.
What Has Been The Biggest Challenge In Your Career Thus Far?
The pandemic destroyed how I used to sell my music which is door to door. I was doing really good with this technique and lived from my music sales. Now I have to work online and it maybe pays 98% less. I now have to work as a waiter and barman to survive.
What’s Your Typical Songwriting Process?
It depends on the project. Sometimes music comes first, other times it’s the lyrics. I play with 4 different music projects from various styles so when I compose a new song, I dispatch it in the right project.
How Has Social Media Influenced Your Career As An Artist?
I got more exposure, I geeked a lot on stats, reached thousands of people… The only thing, maybe in experimental music, it rarely transforms into sales. Exposure mainly.
What Are Some Tracks and Artists Currently On Your Playlist?
The Shape of Sounds, King Gizzard and the Lizard Wizzard (best band on earth), Unecorne, Black Sabbath, many underground bands.
What Did You Do Before You Started Making Music?
Being a child. I started at 11 when I got my first drum kit for Christmas. I started guitar and bass at maybe 13, never stopped. I had more than 30 jobs besides of music. Odd jobs… I’ve been a journalist, diamond driller, salesman, undertaker, name it…
Any Advice For Young People (Men or Women) That Want To Succeed In The Music World?
Be strong, be stuborn and never let anyone tell you you won’t succeed. Do it with all your heart and mind. Be true and humble.
What Would You Change In The Music Industry If You Were A Top Music Executive?
I’d push hard for a return to physical albums as a main way to sell music. Nowadays billionaires make money with my music and I nearly live on food stamps.
How Do You Feel About Originality?
Originality has always been really important for me. I think it’s a symbol of creativity. I always try to go where nobody or really few has been. Avantgarde is my mantra.
Is There Anything Else We Should Know About You Or That You Would Like to Add?
I am a multi instrumentalist so quite all the tracks you hear from my solo project Marionnette Pointue are performed by me. In the comments I get online people usually think Marionnette Pointue is a whole band. L’Orchestre Pointue, PLoZ and Chaton Suicide are all full bands. And another thing, I speak French as first language so sorry if some sentences are weirdly turned.