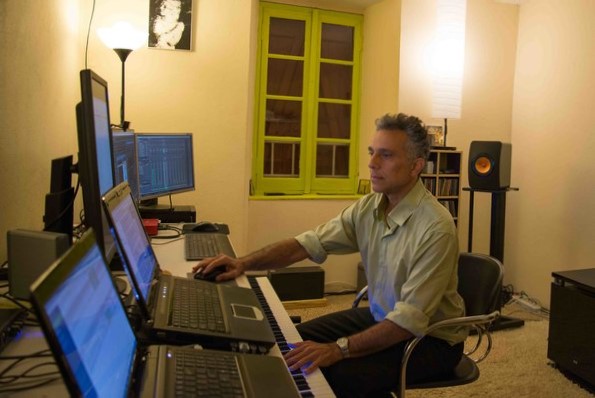 I am born in Athens, Greece, 1961. A rather interesting year to be born in; Yuri Gagarin’s ‘Sputnik’ space flight around the globe, the first human in space!
I am raised in Netherlands and US by adoptive parents, educated in Netherlands.

As a kid, I started playing alto recorder (= vertical flute). As a teenager I ‘upgraded’ by playing the oboe, covering baroque and various classical realms.
As a fourteen year old I saw Pina Bausch’s choreography Sacre du Printemps (Igor Stravinsky).
The impact of that show was enormous and just after that I decided to go into music and arts professionally.
By now I have been Composer and Sound Designer for over thirty-five years, lately developing Sound Libraries as well.
Coming first from the classical music world, conservatory, oboe studies, I started working with different means in the eighties; electronic methods of composing and producing sound design and music.
Most of the time I have been working in The Netherlands and United Kingdom, mainly for stage plays and ballet.
I have strong ties with California US because of my early childhood in Palo Alto, and strong ties with the beauty of Western US nature, for ever.
Nowadays I am situated in rural France, Europe.
As global climate change hit planet earth in very severe ways, I struggle to keep sound and safe, also at emotional and mental levels.
However, I am aware the planetary conditions and my own psychological conditions as well, are somehow forcing me to operate at altered states of ‘being’, enabling me to pitch several Entertainment Industries for at least one more time!

My journey of music and technology is one of hybrid forms combining instrumental and electronic music.
I used to work with true analogue equipment, e.g. analogue synthesizers, for example the semi-modular Korg PS3200.
But the upkeep and maintenance of those gear is fairly troublesome this day and age. So in a way I am being forced to use digital apparatus, such as computers…
After some years of digital hell, sometimes due to system bugs but quite often human errors, I worked myself towards heaven “even without noticing this very process”.
I discovered my creativity thrives best with random processes (..…)
Transition
As we speak I am ‘living in transition’, meaning living towards an artist community, Eco-village or self-sufficient home / business in Europe or Canada. This stage will take several years of time.

Musically and ‘transitionally’ yours,
Matthijs

Additional information about me you can find
https://www.matthijsvos.org/

Matthijs Vos,
What Musical Genre Do You Feel Best Describes Your Music And How Would You Describe Your Sound?
My music and sound design is ‘left field’, haunting but often tender at the same time.
Styles are fusion, world, typically synthesizer, classical and contemporary classical.
Since I am creating my own hybrid analogue – digital environments and building DIY systems, my realm of music and sound is very specific.
I do like dynamics a lot, so compression not that much, although nowadays it is not possible any longer to avoid this all together.
How Did You Get Your Name? Is There A Story?
My middle name is Alexander. In Greek ‘Alexandros’. Named after Alexander the Great of course.
But real historic story about Alexander the Great is a somewhat other one; he was not that ‘Great’ after all, being recorded as the first known to history war criminal.
As being Greek born, but being adopted as an one year old by Dutch sweet people who became my parents, within the foster care home the nurses called me Alexandros because by that time I had quite a temper!
What Are or Have Been Your Musical Influences?
J. S. Bach by far. But John Coltrane as well. Edgar Varese, Olivier Messiaen, Ludwig von Beethoven, Karlheinz Stockhausen, Bruno Maderna, Einsturzende Neubauten, Pointer Sisters.
What Are You Working On Now? Any Future Collaborations We Can Look Forward To?
At the moment I am developing Sound Libraries for RastSound. Working on new music too. Teaming up with new and people I know already for long time.
What Is Your Ultimate Goal In The Music Industry? What Is Your Plan Of Action?
I am working hard to get placements in Feature Film, Series and (VR) Games.
What Is Your Favorite Track To Perform Live and Why?
I merely write and produce music, but in the past I did life electronic stage shows with contemporary ballet.
What Has Been The Biggest Challenge In Your Career Thus Far?
Last three and a half years I have been working on the Contemporary Colours Sound Library at RastSound.
Based on my own work of the last 35 years. I extracted 2200 samples. An incredible challenging project.
But right now it is out and on market!
What’s Your Typical Songwriting Process?
For every project I somewhat develop new work-flow chains and protocols. As you probably understand, all is computer based. But I create my own simulated and emulated ‘analogue’ workflows within digital domains.
How Has Social Media Influenced Your Career As An Artist?
It is not so much social media for me, but special Industry web based platforms are really important for me, such as Music2Deal.
What Are Some Tracks and Artists Currently On Your Playlist?
Spring, Halloween Nightmare – How it all Ends
Of course my music is e.g. on Spotify too with some 70 tracks.
What Did You Do Before You Started Making Music?
Somehow I always have been rolling inside tech and music environments.
I my young years I did some roadie and truck driving jobs. Great fun of course.
Driving into East Germany with New Wave Dutch Band ‘Terras Bangkok’ crossing the Iron Curtain was the ultimate highlight for sure!
Any Advice For Young People (Men or Women) That Want To Succeed In The Music World?
Follow your own path. Please do not give in to main stream too much. Find a balance.
What Would You Change In The Music Industry If You Were A Top Music Executive?
The Return Of True Hi-Fi Listening! (F compression, F loudness)
Let the Music Force Be With You.
How Do You Feel About Originality?
Follow your own path. Please do not give in to main stream too much. Find a balance.