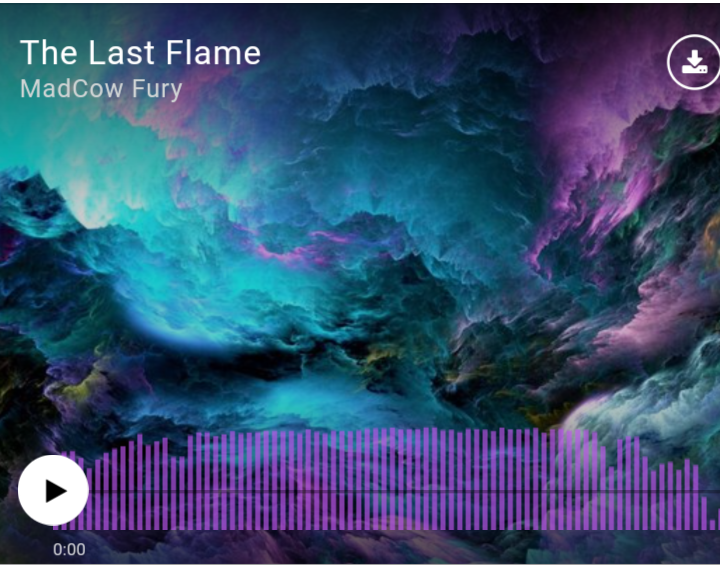 MadCow Fury is an all-original instrumental one-man project generated by multi-instrumentalist, Mike Molina, from Austin, Texas. Mike Molina plays, drums, piano, keyboards, percussion, guitar, bass, flute and xylophone and has spent many years performing on stage and providing recording session work with bands such as, The Rhythm Kings, A Good Rogering, Scraps of Life, My Bastard Children, Skunk Manhattan, Dizz Gillespie, Reverend, and he has shared the stage with performers such as, Mark Farner of Grand Funk Railroad, Ted Nugent, Blue Oyster Cult, Clifford Brown, Augie Meyers, 13th Floor Elevators and Bo Diddley.
Inspired by the raw primordial music & counterculture of the late 60’s & 70’s, the music of MadCow Fury is raw, eclectic, broad-based, risky, diverse and perhaps a little uncommon & eccentric, ranging from rock, funk, jazz, soul, hip-hop, avant-garde, classical, pop, fusion metal, prog rock, blues, ambient, soundtrack, traditional and non-traditional, while incorporating light & dark orchestrated theatrical elements.
Some of the songs, such as “Big Fat Raton”, “Nudie Suits”, “And the Sea Shall Prevail…” are long, a bit complex and difficult-to-assimilate, perhaps a little overlong if you’re not in a purely shape-throwing mood, while some of the songs, such as “Little Flower”, “The Fuzz” and “Turpentine #9” are short and simplistic. There is also a loose jazz-jam element, as evidenced in songs like “Noodle Junk Jam” and “Alligators”. Much of this music is risky and definitely would not be considered as “radio-friendly”.
Overall, the music may not be suitable for the conventional mainstream audience, but rather more likely better suited for the deep track music enthusiast seeking something a bit unpredictable and outside the common musical sector, perhaps while sitting on a beanbag in a room with a black-light, a lava-lamp and incense releasing a fragrant aroma. There is plenty of mind-numbing fusion and fire that takes you on a kaleidoscopic journey, suited for emotional spontaneity and engaged with whole trippy visual experiences which are intended to be planted straight into your mind.

What Musical Genre Do You Feel Best Describes Your Music And How Would You Describe Your Sound?
Psychedelic Funky Rock Jazz

How Did You Get Your Name? Is There A Story?
I am a lifelong animal activist. “MadCow Fury” began as a campaign name to protest against factory farming in the United States, and through the years I decided to take that name on for this musical project.

What Are You Working On Now? Any Future Collaborations We Can Look Forward To?
Working on a new record with hopes to have it completed by Summer of 2022.

What Is Your Ultimate Goal In The Music Industry? What Is Your Plan Of Action?
To write, compose and perform absolute music from the heart, without paying concern to the business of politics that mis-conditions much of today’s music. Music is an art that stems from the heart and soul, and music should never be altered or diversified just to please a music executive’s covetousness. Hoping to bring back the organic spirit of FM Radio that benevolently existed in the early 70’s.

What Is Your Favorite Track To Perform Live and Why?
Performing “Little Flower” and “The Fuzz” live are a lot of fun!! The high energy groove on these tracks provides for an enthusiastic live setting!!!

What Has Been The Biggest Challenge In Your Career Thus Far?
Trying to be 100% original and not sound like anyone else has been my long time ultimate goal. The flipside to this is, if you sound like no one else, it is really hard to get people to listen with open ears.

What’s Your Typical Songwriting Process?
Because I play various instruments, my approach to songwriting fluctuates. There is not a one-size fits all answer for this, although more that 50% of my compositions are written on piano.

How Has Social Media Influenced Your Career As An Artist?
Social Media has definitely reformed by musical path and has allowed me to reach a wider range of people in different ends of the globe, but it has not influenced the music that I compose.

What Did You Do Before You Started Making Music?
Rescuing animals has been my long time

Any Advice For Young People (Men or Women) That Want To Succeed In The Music World?
Be original!!!!!

What Would You Change In The Music Industry If You Were A Top Music Executive?
I would not suffocate artists with controlling politics and bureaucratic rubbish that prevents musical artists from wholeheartedly expressing their own original musical art form.

How Do You Feel About Originality?
It is the absolute most important fundamental element for musical formulation!!

Is There Anything Else We Should Know About You Or That You Would Like to Add?
Thanks!