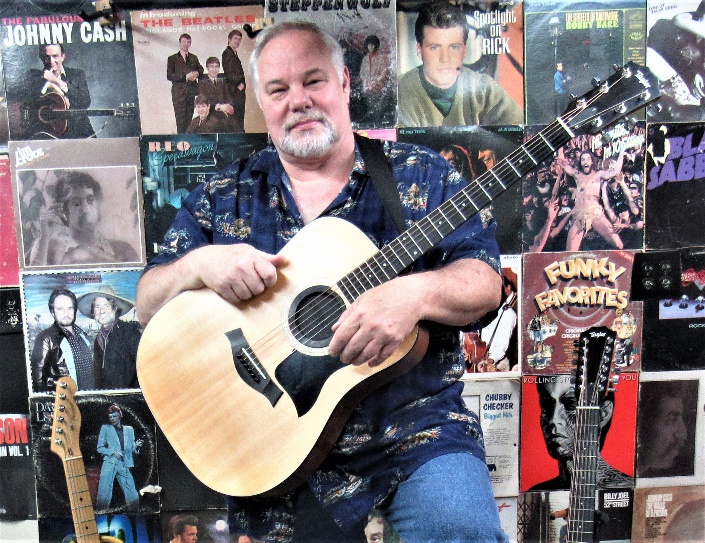 Born in Flint Michigan and has pursued a music career since the age of eight Studied music theory and elements and learned to play guitar and sing Started his first band by the age of 16 and has fronted many bands to the present MDH is also a songwriter and performed an original titled “JESUS BIRTHDAY” at the White House (DC) pageant of peace concert in 1991 MDH is a member BMI, and a former member CMA and IFCO Fan Club of Nashville Tn Was signed to AMI Records and Silver Wing Records in the 90’s MDH has performed at many different Venues such as: bars, private clubs, fairs, weddings, fund raisers, nursing homes, private parties and concerts MDH moved from Michigan to Tennessee in 1996 to work for Saturn/GM Retired in 2007 with 30 yrs service time and started playing steady gigs again and writing music daily Currently promoting his new album(all originals) titled: PHASES OF LIFE Promoting his new single WITHOUT YOU

What Musical Genre Do You Feel Best Describes Your Music And How Would You Describe Your Sound?
definitely country/rocking country my sound is a blend of old country and new country and classic rock blended together someone of a country pop sound

How Did You Get Your Name? Is There A Story?
no story it’s my full name my parents gave me Michael Dean Hall

What Are or Have Been Your Musical Influences?
classic rock and old country bands like CCR Bob Seger skynyrd Johnny cash Hagar Jones there just so many influences to mention

What Is Your Ultimate Goal In The Music Industry? What Is Your Plan Of Action?
my ultimate goal is to get a hit record and be consider a legit Nashville songwriter and recording artist. I’m just going to keep on writing and making records to get airplay maybe a well established artist will notice one of my songs and want to record one of them

What Is Your Favorite Track To Perform Live and Why?
right now it’s my newest single WITHOUT YOU and I think because it’s a real heartfelt song and an event that actually happened to my wife

What Has Been The Biggest Challenge In Your Career Thus Far?
selling my music and getting radio stations to play my music also getting proper PR and proper PR help I’ve been doing all the PR myself and it’s been challenging and it takes away from my writing

What’s Your Typical Songwriting Process?
find a subject to write about first something that can connects with the listener once I establish that I make an outline of everything involve with that subject write it down and pick out the best phrases that people can relate to and understand then find words that all flow together and sound smooth

What Did You Do Before You Started Making Music?
well I start playing music when I was a kid so I guess that would be go to school lol and after graduating I started working for GM building trucks

Any Advice For Young People (Men or Women) That Want To Succeed In The Music World?
never give up and believe in yourself no matter what you hear or what people say and don’t think every song you write is going to be a hit just keep plugging at it and don’t let people bring you down listen to the people who been there and got a good track record and can actually help you climb another rung on the ladder

What Would You Change In The Music Industry If You Were A Top Music Executive?
give a lot of the unknown musicians and writer a fair shake and listen to their music I know a lot of writer that have outstanding music but because they have no connection or the money to put their music in the right hands it goes unheard just think about the music we haven’t heard that probably a hit

How Do You Feel About Originality?
To me originality is number one to write something nobody has done or heard is the greatest feeling in the world I remember when I heard the first song I wrote on the radio I was so excited it changed me and then when I heard listeners liked my songs and were requesting my originals it just made my day.. The thing about originals is you never know what kind of subject the writer comes up with it could be heartfelt personal or subject that nobody’s ever wrote about !!!

Is There Anything Else We Should Know About You Or That You Would Like to Add?
As I stated never give up your dream if you can help it I’m an older musician and writer and I’m still hungry and got the eye of the tiger to do good in music don’t let age (it’s a number) creed or religion stop you from doing what you like to do. I know I’ll play and write music until the good lord tells me not to god bless everyone Michael Dean Hall