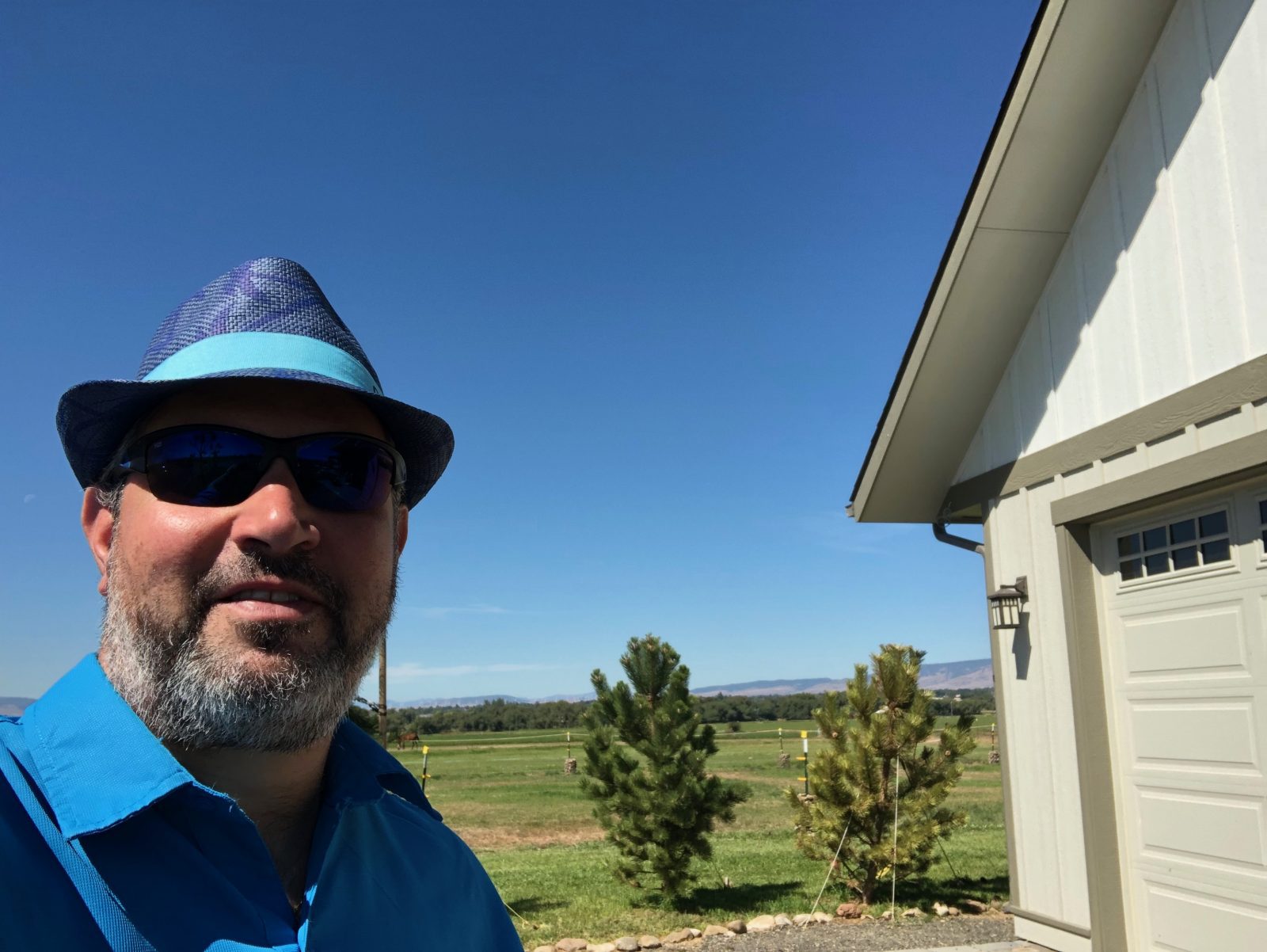 I guess I always say EDM, because mainly I created most of my music electronically, and most of it is pretty upbeat and you can dance to it. But really, if you listen to all my songs, you’ll hear mixes of Rock, Reggae, Blues, Soul, R&B, Psychedelic Rock, Acid Jazz, Jazz, Hip Hop, Trip Hop and many more, as well as some ballads and love songs, so it’s always very hard to just put the whole repertoire in one category!

Well, this name came about way back in 2004 in New York City, where I was living and working at the time. That’s when I first got it into my head that I could do samples because I had found a small batch of them on a video editing program while I was working an editing job at MLB.com . I had never played around with these before, and during my break time, I created my first ever electronic songs – “From Panic to Chaos” and “Switch It Up”, both now featured on my debut album, “Babylon Music.” I also was working as a cell phone salesman when gmail and google first came out or were getting very popular, and I needed to create an email address. I realized that I really wanted to play electric guitar as well, so I named my email address ElectricE@gmail.com, and I decided to use the name “Electric E” as my artist name back then, and I guess it stuck because I have never changed it since then!

Too many to mention in every different genre – lets go with The Police, Rush, Peter Gabriel, Led Zeppelin, Bob Marley, Steel Pulse, Black Uhuru, Van Morrison, Bob Dylan, Jimi Hendrix, Santana, Nas, 2Pac, A Tribe Called Quest, Dr. Dre & Snoop, Marvin Gaye, Nina Simone, The Temptations, Smokey Robinson, Ray Charles, Stevie Wonder, Fleetwood Mac, Pink Floyd, Lenny Kravitz, the Red Hot Chili Peppers, Miles Davis, John Coltrane, Suzanne Vega – see I told you there were too many! I could go on and on and on!! Not to mention all the amazing underground NYC musicians I used to watch play live constantly, including my bro Guyora Kats, a very talented musician in his own right!

I am working on my 5th full album (to go with one EP) that will most likely be titled “Erupting”. After doing most of my albums electronically initially, I have made a commitment in my last 2 albums (“Velvet Circles” and this upcoming one) to try and play live instruments and sing a lot more than in my 2nd and 3rd albums. In many ways I’m going back to the songs I wrote back in the early days around 2006-7, but trying to put a modern spin on them. It is still pretty difficult for me to play some of the songs I wrote on guitar/keyboard, so that can be frustrating, but I always manage to mix in some electronic songs in there as well just to keep the creative juices flowing if I get stuck!

As far as collaborations go, I really haven’t been able to swing that yet, but if I had my dream collabs right now, I’d have to say it would be to work with Elise Trouw or Tash Sultana. I love how they do the “one-woman show” with looping on several different instruments, and they are both amazing musicians and singers on top of it, so I guess you could say if I could be the male version of them, I’d be pretty psyched!

To be a huge star and have the whole world singing all the lyrics of my songs and dancing the night away to it in packed concerts or night clubs!! Isn’t that every musician’s goal?!?! Maybe that’s a bit of a stretch, but that’s definitely the dream! 🙂

Well, I hate to admit this, but my experience playing live is somewhat limited. I definitely want to improve to the point where I can rock the house with a full 2-hour live set, but I’m still trying to figure that out. Thus far, 20 mins is probably my longest show and ironically I played those songs on guitar at open mics. The songs off my latest release, “Velvet Circles”, “My Life”, “Come Down”, and “All That I Am” are amongst the few that have ever been played live. I will do more by DJing too if necessary!!

Playing and singing with live instruments live, for sure! And getting recordings right, with the correct levels for vocals and instruments, etc., can be very challenging as well!

Well, I started off writing poetry when I was about 16, and I wrote tons of poems – so many that I published 2 and a half full books of poetry! Many of the poems that were unfinished, or sounded more like song lyrics, eventually got turned into songs, and I’d say that in the past 10 years or so, I have focused almost exclusively on songwriting and moved away from writing poems entirely. But the roots of all or most of these songs definitely came from poetry (and some bad breakups with ex-gf’s!! :-)!!

As far as the music goes, there’s not always a set process. I’ll sometimes experiment with samples, and they just match the lyrics I have, or I search for a match. Sometimes a whole song just comes into my head, or I find the right sample right away, and that always blows my mind! It takes a lot of experimentation and fidgeting, and it doesn’t always go smoothly (like this current album I’m working on has been pretty tough from that standpoint). But when it does go smoothly, it’s the most beautiful thing ever!

It has, but I really find that I don’t always have as much time to promote my music on these outlets as I’d like to. That’s why you need to get big so you can make lots of money to pay people to do that stuff all day right?!?! 🙂 Maybe some day? No, but I do enjoy it, and I use my website and the big sites as often as I possibly can to try and attract the biggest audiences that I possibly can! Facebook, IG and Twitter are my biggest go-to’s along with my website links, etc.

Believe it or not, I’ve been digging on a lot of BB King, Joni Mitchell and Paul Simon recently. I also have enjoyed some Wyclef Jean and the Fugees (The Carnival is an album I absolutely love!!) as well as Sting, Elise Trouw and Tash Sultana as I mentioned, and Depeche Mode usually sneaks in there as well along with Sade and even Massive Attack is a group I really love! I also went to Jazz Fest in New Orleans a couple months ago, so plenty of jazz, funk, and New Orleans R&B and soul are always coming in somewhere! Classic Rock is my preferred music when I’m driving!

I was an athlete, playing almost every team sport plus tennis when I was young. And as I said earlier, I started off writing poetry and some prose. I always listened to tons of music and my bro was always practicing at home as well. My whole family is pretty musical, so I was heavily influenced there – also going to concerts and festivals from a young age as well to hear live music in spots all over the USA and the world! At some point in college, I started to sing too (often times in drumming circles, etc), and I found that I liked the way my voice sounded as well.

It’s kind of cliche, but I’d simply say “never give up on your dreams”, never stop playing or singing or whatever you like to do creatively. If you stick with it, sometimes songs or lyrics or poems literally just come out of nowhere, and you find yourself doing things you never thought you could possibly do! But that only comes if you stick with it through the ups and the downs (because both are inevitable) and continue to create and stoke those fires. I’ve written songs in foreign languages (like my song “Ella” in Spanish), just from translating a poem or lyric, and that was incredible I have to say!

I miss the era when full albums were released. Nowadays, so many artists are putting out singles and/or EP’s, and that’s all fine and good, but to me, the best albums were the ones that told a complete story with a whole bunch of songs. Bands like Rush and Led Zeppelin, Bob Marley and the Rolling Stones obviously perfected this art, and albums like Dr. Dre “The Chronic” or Chili Peppers “Blood Sugar Sex Majik” and “Californication” as well, so as a result, I’ll always take a great album over one or 2 great songs any day, so let’s bring that back into fashion ok?!?!

Everything you do should always be as original as possible! Of course, we all borrowed from recycled material from the past, and we’ve all listened to the classics, and been inspired by the legends and local bands alike. At times it might seem as though, “it’s all been done before”, as a famous pop song once quoted, but I think the fastest and truest way to either get popular or stand out from the crowd, is to ultimately find that sound that is uniquely your own. And I think we pretty much know it when we’ve found it, and just continue to build from there.

Not too much – just that I am a man of many interests on top of music (which I obviously adore). But I’ve worked in sports as a cameraman, coach, announcer, editor, and in league offices, and I’m also a Language Arts teacher so I am a lover of the written word in all its forms. I love reading just about any type of medium, and I’m a huge movie buff too, but these days I’m becoming a binge-watcher of many TV series cuz there are so many of them nowadays!!