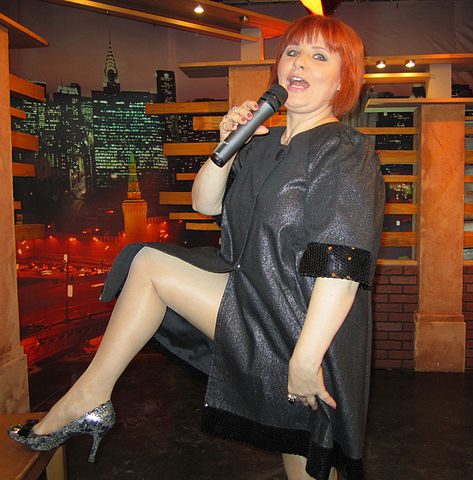 Lala R is the stage of the 21st century. This is how American music critics spoke about the Russian singer Lala R after one of the concerts in America. Then Lala performed with a group of artists from Israel. First, she sang a prayer in Hebrew, then a Russian song, a Yemen song in Yemeni, and popular songs of the winners of the Eurovision Song Contest. Suddenly an exclamation from the audience: “Today is Barbara Streisand’s birthday, please sing something from her repertoire.” Knowing how Americans love their singer, Lala did not lose her head and sang her favorite song by B. Streisand “Memory”. Grateful listeners staged a storm of applause. After that, music critics called the talented Russian singer a representative of the pop art of the 21st century, noting that “Lala R covered Barbara Streisand.”
In America, where Lala lives with her husband Boris Lyudkovsky, critics have defined their music as the “Any way ” style. Translated into Russian, this term means “songs for any occasion”, that is, songs for everyone. In fact, this is a unique, true designation of their performing skills in the Russian genre. Drawing attention to the singer with a beautiful voice, various publications wrote about her that “Lala R sings for everyone!” … “This is a huge achievement in the world of Russian culture abroad. It seems that even in the West there is no such musical direction as “any way” for any American musician. And here Lala R and Ludkovsky were the first!” … “Her songs are for everyone, “any way”! They are relevant, songs for any occasion of life, they are close to everyone! It is very pleasant that it was our Russian singer who was noticed by American music critics and responded so kindly to her …
Russian listeners and connoisseurs of the true stage, who will come to Lala R’s concerts, will be able to appreciate the work of a stylish singer. For everyone and everyone, wonderful songs will be heard that are sung with soul and heart.
It so happened that in other countries and on other continents our singer is known better than at home. However, there was a time when her childish voice sounded in every Soviet home. Then Lala soloed in the children’s choir of television and radio broadcasting under the direction of Viktor Popov. As the first performer, she sang wonderful songs of the Soviet stage “Beautiful Far Away”, “Forest Deer”, “Winged Swing”.

But I, a journalist, still want to understand why demanding Western critics attributed Lyalya R to the stage of the 21st century? Because she sings in different languages ​​and she can control songs from the repertoire of any world stars? And maybe it was Lala, working in the “Any way” style, who brought a new genre of “Variety of the 21st century” into our art with her creativity? Don’t know. But one thing I am sure that many artists, especially beginners, will want to fall within this designation. A multi-faceted talent like Lala’s is the format of the new millennium. Lala’s professionalism is the key to her success.

What Musical Genre Do You Feel Best Describes Your Music And How Would You Describe Your Sound?
Lala R is the stage of the 21st century. This is how American music critics spoke about the Russian singer Lala R after one of the concerts in America.

How Did You Get Your Name? Is There A Story?
This is a long story. As a child, I was a soloist of a large children’s choir, radio and television of the Soviet Union, and I recorded many songs on the radio for the golden fund of radio broadcasting. of course, at that time I didn’t have such a stage name as Lala R, and I was Lena Osipov, then after marrying my husband I became Elena Lyudkovsky and my producer came up with a more sonorous stage image for me, Lyalya Rubleva, and for a long time I worked under this name , but all our American friends and my musicians convinced me to simplify the sound of my name, since it is difficult for them to pronounce Lyalya Rublev. And now I ask you to love and favor Lala R.

What Are or Have Been Your Musical Influences?
As a child, I loved to listen to folk music, I was also very interested in classical music while studying at a music school and then at a music academy. Later, having started working in a big concert show, as a soloist, I became interested in popular music of various genres and directions. And finally, having married a musician, arranger and composer Boris Lyudkovsky, I fell in love with jazz music and saxophone

What Are You Working On Now? Any Future Collaborations We Can Look Forward To?
Of course, my husband Boris Lyudkovsky and I are always working on new songs, as well as writing new tracks for the saxophone. Friends, who will be interested, you will hear everything by going to our YouTube channel, Facebook page and Spotify.

What Is Your Ultimate Goal In The Music Industry? What Is Your Plan Of Action?
My goal is to please people, to give them good, high-quality music and to make people’s lives more joyful and enjoyable.

What Is Your Favorite Track To Perform Live and Why?
I can’t answer specifically. Everything that is beautiful, rhythmic and has a pleasant melody is dearly loved by me.

What Has Been The Biggest Challenge In Your Career Thus Far?
To repeat the magnificent, inimitable singer Whitney Houston, but decided not to do it in time, because there cannot be such a second one.

What’s Your Typical Songwriting Process?
Usually my husband Boris Lyudkovsky writes a draft of the melody and beat of the next song, we discuss it together, then order the lyrics of the song, working with various talented authors, and finally start recording in our home studio Souvenir USA studio.

How Has Social Media Influenced Your Career As An Artist?
I have a large army of fans and friends in social networks. We are friends, we invite them to our performances. They are very warm and loving towards our work and support us.

What Are Some Tracks and Artists Currently On Your Playlist?
Artists of different genres and trends

What Did You Do Before You Started Making Music?
For as long as I can remember I have always been engaged only in music, this is my whole life.

Any Advice For Young People (Men or Women) That Want To Succeed In The Music World?
Try to treat music with all your heart. Do not sing out of tune, be sure to sing before you go on stage or go into the studio

What Would You Change In The Music Industry If You Were A Top Music Executive?
To be a real musician or singer, you have to devote a lot of time to singing or playing your musical instrument.

How Do You Feel About Originality?
With great care. Laugh! The main thing is that it should not be too much

Is There Anything Else We Should Know About You Or That You Would Like to Add?
Check out our YouTube channel and Facebook and let’s chat. With love, Lala R!