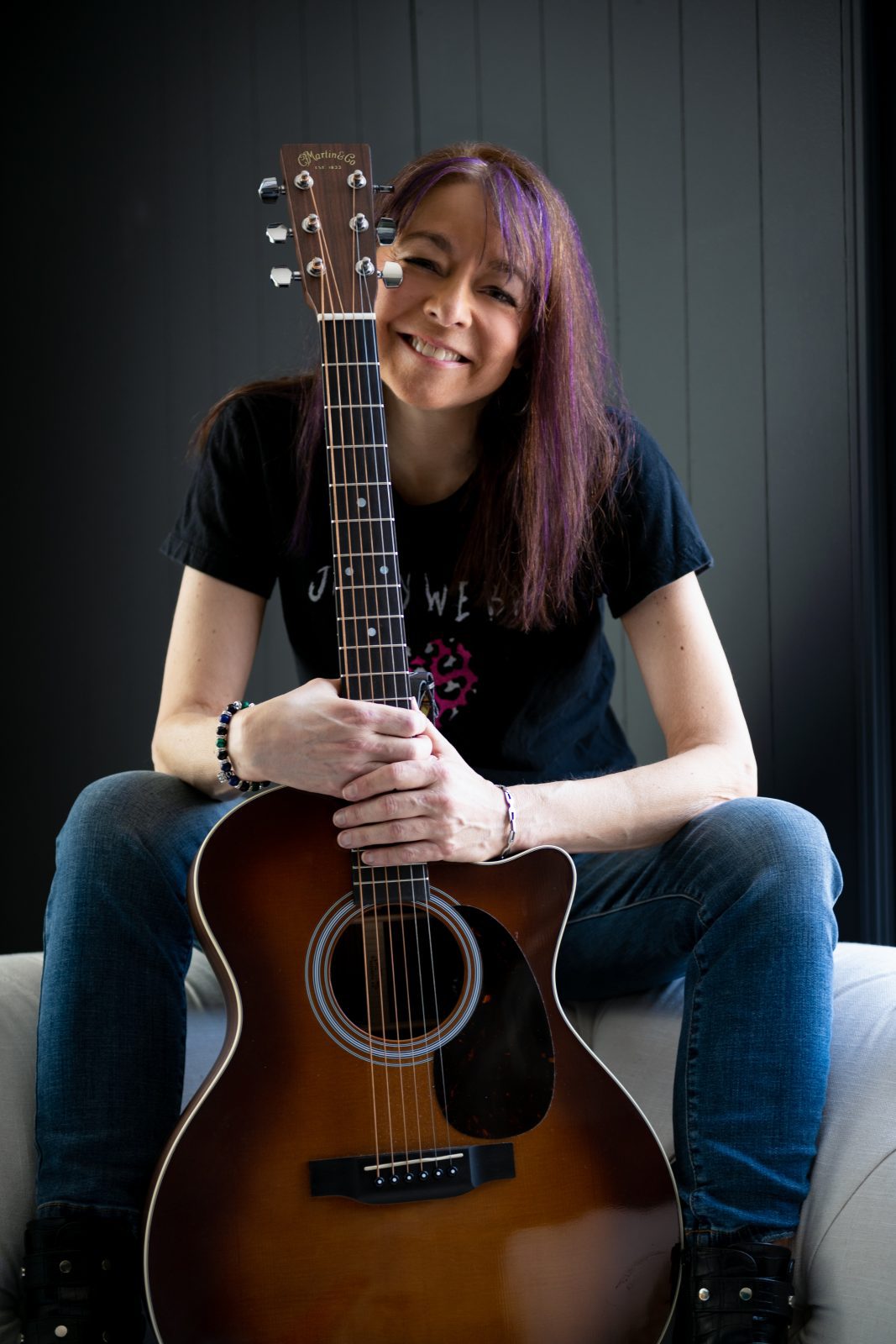 Growing up in Charleston, SC, Kristi was embedded in the local music scene there, taking guitar lessons, singing on occasion, running a local music store, and working for an entertainment newspaper.
She lived and breathed music.
Then life got in the way, and she let it go.
Now, after a more than 25-year hiatus, Kristi decided to pick up the guitar again in 2020.
She was inspired by another artist to get back to her first love, music. Songwriting, singing, and recording is her life and her passion.
he has been writing constantly and working with some amazing musicians/friends.
She is very excited to be on this new path, one that brings her back to herself.
Back to bliss.

anthem from songwriter and artist Kristi Jacques. Backed by the crisp and captivating sound of
singles like the rock

classic ‘Mosaic’, and the softer rock ballad of inspiring origins, ‘In Plain Sight’, the new release
elevates the versatility

and appeal of an increasingly unmistakable Kristi Jacques.

Utilising a fine build-up from heavy metal verses and soft vocals through to the further contrast
of a simple, satisfying

hook, the words ‘I am what I am’ wrap up the revealing details of the story, with a suddenly
inclusive, hugely anthemic

moment. Get Outta My Way’, released August 12th, brings back a nostalgic alt-rock writing style
and sound, yet also

introduces a fresh voice of authenticity, skill and purpose combined. Despite the clear talent,
professionalism and

appeal of her singles so far, Kristi takes on the music world of ‘22 after a multi-decade hiatus
from performing.

Currently based out of Myrtle Beach, SC, Kristi was raised in Charleston, and her background
included heavy

involvement in the local music scene, along with guitar lessons, singing, helping run a music
store, and working for an

entertainment newspaper. While life would soon deal other cards, her early years spent
immersed in the art-form

defiantly contributed to her newly found ability and desire to recapture a lifelong passion.
Notably moving from

strength to strength since re- embracing music, Kristi’s latest single ‘Get Outta My Way’ is
perhaps her most engaging

and infectious rock hit yet. An earworm intertwined with mighty escapism, a musically
captivating release, which draws

further focus to an artist and songwriter well worth knowing about.

I don’t think I really fit into any one genre. I’m kind of a music mutt, a little bit of everything.
I grew up listening to country (I had no choice because my dad listened to it), I studied classical and opera.
Then I found rock and everything changed.

I listened to Patsy Cline and have performed some of her songs in my younger days.
Stevie Ray Vaughan was another, along with Freddie Mercury.
I love singers who have so much passion for their craft and you feel the emotion. That is what moves me.
Currently I am inspired a great deal by Myles Kennedy who can wear his heart on his sleeve
when he writes and performs. He is honestly the reason, the inspiration, for me getting back to music again.

What Are You Working On Now? Any Future Collaborations We Can Look Forward To?
I am working on some new songs for 2023.

I believe the first will be released the end of January/first of February.
I have many more in the works because I seem to write a lot. I’m so excited to be doing what I’m doing.
Finally living my dream.

I aspire to be a better overall musician.
Improve my guitar playing and singing as well as becoming a better songwriter.
I would love to write a song with the one who inspired me one day.

I don’t currently play live.
I record in my home studio and sent to my producer who uses his magic to make me sound better.
I am dealing with a chronic lung issue that prevents me from doing too much outside the studio, but I am constantly working on it and getting better slowly but surely.

I would say my health, but mind set has been a big one.
I don’t always very confident in what I’ve written or how I sound. But again, this is something I work on every day, and it’s getting better.

I write mostly the lyrics.
There really is no rhyme or reason for them.
I have had lyrics wake me up in the middle of the night and I have to write them down. It can be a word, a phrase, or even an entire song.
I don’t know where they come. I will then take those snippets and work on them to refine them, and then fine a good co-writer to help with the music and melody if I don’t already have that. I love collaborating.

I follow bands like Alter Bridge, Art of Dying, Tesla, Sevendust and more.
Then again, I also have some Miles Davis and Pat Matheny.
I am a big Clint Lowery fan (who is in Sevendust and also one of my co-writers). My newest obsession is the band Cardinal Black.
I found them through social media.

I was a Diabetes Lifestyle Coach.
I am Type 1 myself and I worked with mostly adults who have Type 2, getting their numbers under control.
I can still work with people on occasion if they are committed.

Don’t give up.
Don’t listen to those negative voices in your head.
If you really want to do something, just go for it. I truly wish I had never stopped.
What Would You Change In The Music Industry If You Were A Top Music Executive?
I would make sure that artists were paid fairly.
Streaming services don’t pay anywhere near what is fair.
Without the artists, there would be no music to put on those platforms.

The world would be very boring if everyone sounded the same. I understand trying to emulate another artist, but make sure to also be yourself, tell your story.

I’m just very grateful to be here, doing what I love. I want to keep it going