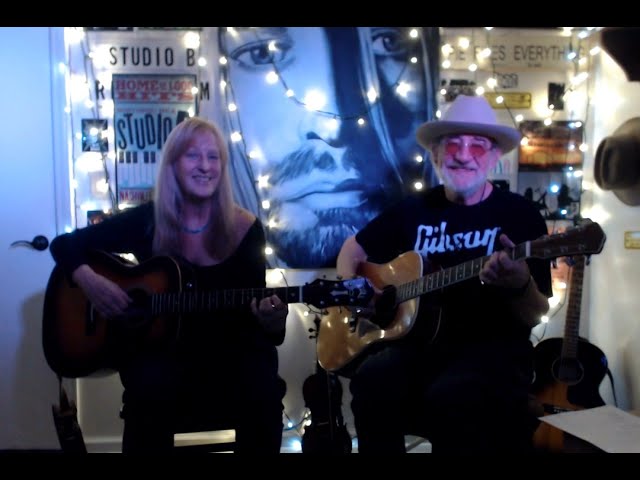 Since 2008, the acoustic, contemporary folk musicians Robin Roberts and Billie Preston have been performing
steadily at a variety of venues in Wichita, Kansas, and the surrounding regional area.
They are always on the lookout for fun and interesting places to bring their renditions of folk, blues, and bluegrass tunes.
In January of 2010 they released their CD “Pay-Day Motors“ with fifteen original songs written by Robin that includes
the fiddle playing of Kansas Music Hall of Fame inductee Scott Piper and harmonica by Kirk Sorensen, both of
Wichita. The CD has put their music in the hands of hundreds and opened many doors for them as performing musicians.
Robin and Billie’s 2nd CD, “LIVE from The Underground,” features material either written since the last CD was
recorded or resurrected from decades long ago. Scott Piper joined them for this performance, as well.
Robin is a singer/songwriter, guitar and banjo player from Norwich, Kansas. You may know him from the 70s band
Prairie Fire, or from the Singer/Songwriter Circle and Open Mic Night at The Artichoke Sandwich Bar, or from
Grandma’s Farm on Tyler Road, or from Stage 5 at Winfield… he has been writing songs and playing for decades.
Billie Preston is a folk singer from Wichita who brings vocal harmony and finger picking guitar to the duo. Billie is a
voice, guitar, ukulele, and piano teacher, and manager for the group. She is an entertaining performer whose vocals
bring depth of emotion and feeling to the wonderful lyrics of their songs.
Robin and Billie’s concert repertoire is a blend of Robin’s original compositions (a genre hybrid sometimes referred to
as “folkgrass”), interspersed with new arrangements of traditional and other songs. Together they create a sound that
is warm and fun, edgy and smooth… an all-around good listening time.

I was named after Hall of Fame baseball pitcher Robin Roberts, who played for the Phillies in the 50’s

Billie was named after her dad Bill and her Mom’s middle name, Preston. Billie Preston

since 2008 we have been known as. “Robin Roberts & Billie Preston”

right now we are releasing a new single every month. We’ve done like 9 or 10 in a row now.

At this point in life i’m just writing a song here and there and releasing singles. Me and Billie

have played over 1,000 live gigs, but quit playing in bars about a year ago. We enjoy doing this

more. Maybe a festival now and then.

“Where the Bluegrass Grows”, playing on Stage 5 at the Walnut Valley Festival in Winfield, KS in September every year

It’s a song I wrote in 2008 and is well loved by a lot of people that camp down by the river in the Pecan Grove.

Normally we have several other musicians playing with us for this event.

jobs and didn’t get to tour or play the out of state gigs like a lot of people. But I don’t have any

complaints. I have good kids.

It depends if it’s an emotional song or a topical one. But it starts with a lyrical idea, and then and
melody, and then a process of figuring out the lyrics and arrangement. I continually re-write it
until i can live with it. It usually takes a couple of days, but can take years.

It has given us the opportunity to share that didn’t exist before and motivated us to do things
like make videos to share our music. A place where we can make people aware of new things at
any times. Lot’s of free advertising.

I’ve been making music most of my life while doing other things to survive. Mostly drawing pictures, architectural work.

Billie is a music teacher here in Wichita, KS. She gives private lessons on guitar, voice, piano, ukulele, and other things.

Strongly, I love it

I was born on the day Hank Williams died